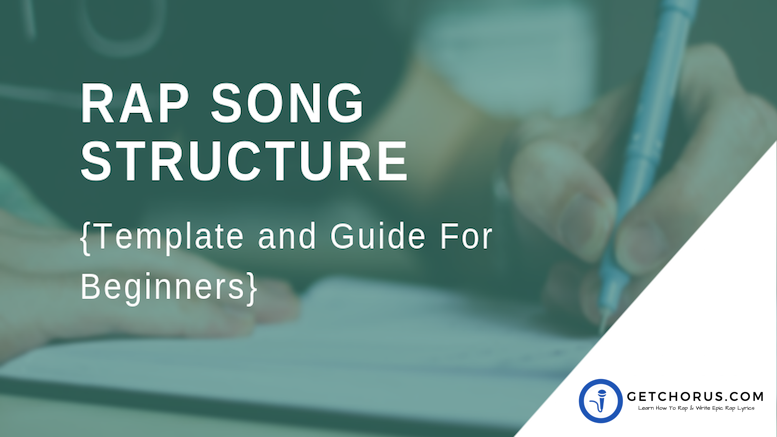 by Dan Hartnett // February 20 //
!Attention Rap Artists, Singers & Songwriters!
Let Us Guide You!!
We have a lot of content on this blog.
Take this simple 20 second Quiz to Help You
Find The Exact Content You Are Looking For!

We’ll be looking at what you need to create a song structure is and exactly what kind of structure you’ll want for your rap songs. There are numerous structures and each of them have their own advantages and disadvantages so it’s best to weigh their pros and cons before deciding what to use.

Now with that out of the way, we can get into what composes a song structure. These are:

How Do I Write An Intro To Rap Song?

As with every song, the introduction is just that, an introduction. With most artists, they would usually include a small section of rap lyrics here that lasts for about 4 bars or as long as 8 bars. These sounds can be literally be anything you want: a small speech, some car noises, mumble sounds, etc., depending on the song.

Older rappers usually use this component compared to newer and upcoming artists. Using The Notorious B.I.G.’s song “Big Poppa”, he alongside with Puff Daddy can be heard in the intro of the song.

How To Start A Rap Verse?

A typical rap verse is usually 16 bars in length, typically repeated three times in a song and has less instruments than in a hook. This is where you usually show freestyle rapping ability you have to flow with the beat of your hip hop instrumental.

These days, you see verses with as little as 8 bars and as long as 24 bars. 24 bars are usually used in a story telling structure, since it gives you more room to talk, but you’ll have to cut down on the hook unless you want a really long song. So, a verse can have 8 bars, 12 bars, 16 bars, and up to 24 bars in total.

That’s a lot of bars.

If you plan on using the story telling structure here, you’ll be using the 24 bars so that you have more room to tell your story rather than using the normal 16 bar verse that only contains 16 bars.

WHAT IS A PRE HOOK IN A SONG

This is also known as the after hook or before hook. It’s there to assist the rap hook, which is typically comprised of lyrics that are so repetitive that you’ll be repeating it in your head as soon as the song ends.

It usually repeats a statement or something really simple. It can act as a heads up that the chorus is coming if used before it, which is a good thing since apart from punchlines, the hook is one of the most memorable parts of the song.

A pre-hook consists of as little as one bar to the maximum which is 4 bars and is rarely used in rap songs but is essentially still used.

A good example is Kanye West’s rap song “All of the Lights”, where he utilizes the pre-hook/ pre-chorus.

WHAT IS A HOOK OR CHORUS IN A RAP SONG?

One of the most important components of the song, apart from the verses. This is the busiest part of the song, with most of the instruments being played in its duration. The main point of a chorus is to sum up the whole meaning of the song, and lasts between 4 to 8 bars that gets repeated three to four times in a song.

In this part of the song, it’s best that you make it memorable because this is what most listeners will be focusing on, lyrics wise and melody wise.

If you want to learn more about on how to make a hook for a rap song read this article here.

Good examples OF A Bridge IN A RAP SONG

You can usually find a bridge between two choruses before the end of the song. They are 4 to 8 bars in length and gives off a different feeling from the verse and chorus because they contain lyrics that aren’t found anywhere else in the song.

You won’t hear the bridge much in rap songs however you will hear it from time to time. 50 Cent’s song P.I.M.P. featuring Snoop Dogg has a bridge in it that you can hear being delivered by Snoop Dogg.

F-I-F-T-Y C-E-N-T and S-N double O-P
We internationally known and locally respected
(And you know you're just a P.I.M.P!)
Now what you know about me?

The outro is, just like the bridge, rarely heard in rap songs. However, when used, they can exert a strong feeling for the song. Just like the intro, it can be any sort of noise as long as it fits with the song as a whole.

Other times, a hook can be used a second time in place of an outro. The tempo and even the beat of the music can change here as well. If you don’t have anything to add as an outro then you can cheat a little and just use the main chorus or hook if you want.

We’ll be using Kendrick Lamar’s song “The Heart Part 4” where he has a short outro at the end of his song.

Now that we’ve covered everything about the components of a rap song, we’ll be moving forward with the different types of song structures.

There is no solid number as to how many types of structures there are, so it’s hard to cover every kind of combination possible. With that in mind, I’ll be going over the more important and most used kinds of structures.

It’s more commonly used because it’s one of the easiest structures, it isn’t too long and it isn’t too short either. It typically lasts 3 – 4 minutes, depending on the speed of your instrumental and how many bars you decide to use in your verses.

With this structure being so simple, you can choose to play around with it to give it your own touch. There are also different kinds of variations that you can see being used in songs such as:

EXAMPLE OF A RAP SONG TEMPLATE

You can choose to include intros, outros and bridges into the structure and it would still be fine. Just don’t overdo it. If you listen to most rap songs, you’ll see that they are using this structure or a variation of it.

Listen to some rap songs that you love or listen to your favourite rapper’s album, and you’ll be able to tell the differences with the different kinds of variations of this structure that they use.

This kind of song structure is commonly used in pop songs. It’s easily repetitive and is great for younger people. This structure consist of:

It has great variety and is great to use if you have an amazing rap chorus that you want people to focus on.

With this sort of structure you can use almost every component of a song that we talked about just a few paragraphs ago and a few more that we didn’t touch on, but it isn’t meant for rap songs, since there is too much going on that it will take away from the song itself.

Most generic pop songs use this structure. Go ahead and listen to some pop songs, you’ll be sure to find that they use this structure more frequently than not. This kind of song only lasts for 2 – 3 minutes, depending on how repetitive the writer makes the song.

This is the song structure to use when you have a lot of things to say. The verses in this type of structure has 24 bars, which gives a rapper more than enough to tell a story with their song. The choruses/ hooks are much smaller in this, only containing 4 bars, otherwise the song would drag on for too long.

This sort of structure focuses on the emotion of the song and the story being told, rather than the repetition and choruses that you hear in the other two structures mentioned. The only way people will remember your song is if your story is worth remembering.

A good example of a story telling rap song is Eminem’s “Stan”, where he goes on to tell a story about a fan that is growing increasingly obsessed over his favourite artist as his life starts to fall apart. Stan continues on writing to Eminem until he eventually loses it and offs himself.

When Em finally responds, he not only starts to piece together whole story that the creepy fan was Stan, but he was also the one who offed himself in his car.

This song is full of emotion with its compelling narrative, even if the act of a multimillionaire rap artist would respond to a fan’s letter would seem very unlikely.

However, there are artists that throw away the song structure completely and do what they think would best suit their song. One example of this is Meek Mill’s Dreams and Nightmares. This song is essentially one long verse that doesn’t seem like one because of the different tempo and beat changes.

These are the main types of structures used. Everything else is either under them in a subcategory or is just a variation of one of the main ones. You could try out each one of them and find ones that work for you.

You’ll have to remember though, there is no “right” structure. It merely depends on the content you have.

Yes! Show Me This Video Course
Previous
Next